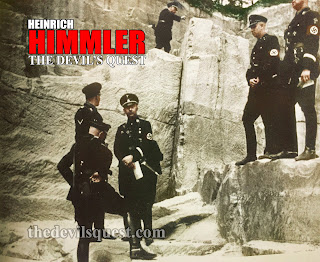 A rare photograph of Himmler with his mystic advisor Weisthor ( Wise Thor ) [ Above ] and Chief of staff SS Oberführer Wolff [ Right ] inspecting ancient Germanic runes in a quarry in the Palatinate 1935. Previous to being appointed as head of SS Race and Settlement Main Office in 1934 and his subsequent role as Himmler's 'Rasputin,' Karl Maria Wiligut ( self proclaimed wise Thor ) was committed to Salzburg mental hospital for two years in 1925 with his condition described as "psychosis."
Post a Comment
Read more